Products of Citeq Biologics are used by scientists all over the world. Besides active collaborations with multiple research groups our products are cited in articles which will be listed here but can also be found on Google Scholar.

Background Although originally defined as a type 2 (T2) immune-mediated condition, non-T2 cytokines, such as IFN-γ and IL-17A, have been implicated in asthma pathogenesis, particularly in patients with severe disease. IL-10 regulates TH cell phenotypes and can dampen T2 immunity to allergens, but its functions in controlling non-T2 cytokine responses in asthmatic patients are unclear.

Objective We sought to determine how IL-10 regulates the balance of TH cell responses to inhaled allergen. 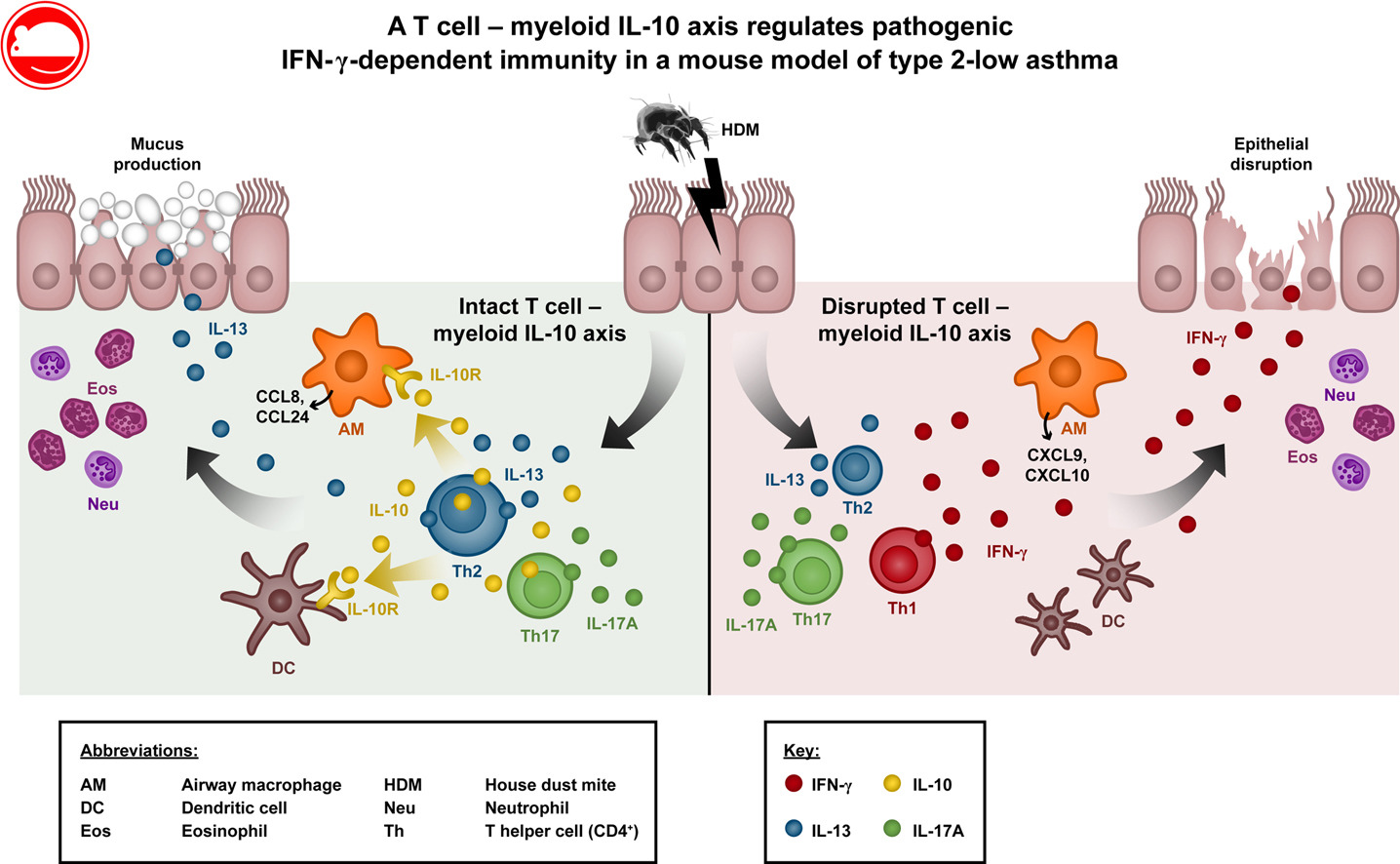 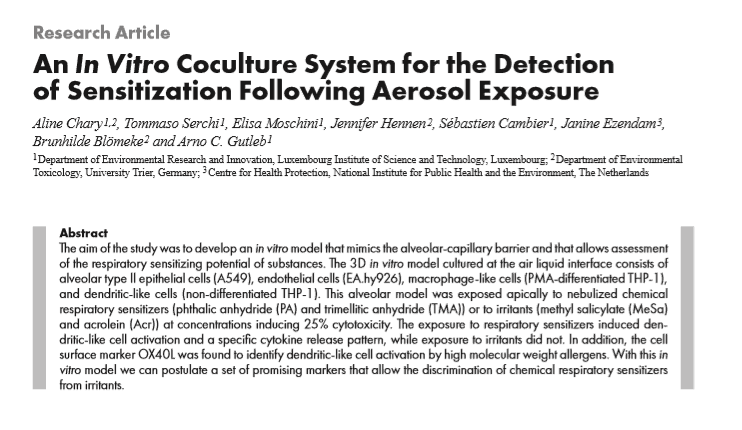 The aim of the study was to develop an in vitro model that mimics the alveolar-capillary barrier and that allows assessment of the respiratory sensitizing potential of substances. The 3D in vitro model cultured at the air liquid interface consists of alveolar type II epithelial cells (A549), endothelial cells (EA.hy926), macrophage-like cells (PMA-differentiated THP-1), and dendritic-like cells (non-differentiated THP-1). This alveolar model was exposed apically to nebulized chemical respiratory sensitizers (phthalic anhydride (PA) and trimellitic anhydride (TMA)) or to irritants (methyl salicylate (MeSa) and acrolein (Acr)) at concentrations inducing 25% cytotoxicity. The exposure to respiratory sensitizers induced den­dritic-like cell activation and a specific cytokine release pattern, while exposure to irritants did not. In addition, the cell surface marker OX40L was found to identify dendritic-like cell activation by high molecular weight allergens. With this in vitro model we can postulate a set of promising markers that allow the discrimination of chemical respiratory sensitizers from irritants.

Background Phosphoprotein associated with glycosphingolipid‐enriched microdomains 1 (PAG1) is a transmembrane adaptor protein that affects immune receptor signaling in T and B cells. Evidence from genome‐wide association studies of asthma suggests that genetic variants that regulate the expression of PAG1 are associated with asthma risk. However, it is not known whether PAG1 expression is causally related to asthma pathophysiology. Here, we investigated the role of PAG1 in a preclinical mouse model of house dust mite (HDM)‐induced allergic sensitization and allergic airway inflammation.

Methods Pag1‐deficient (Pag1−/−) and wild‐type (WT) mice were sensitized or sensitized/challenged to HDM, and hallmark features of allergic inflammation were assessed. The contribution of T cells was assessed through depletion (anti‐CD4 antibody) and adoptive transfer studies. 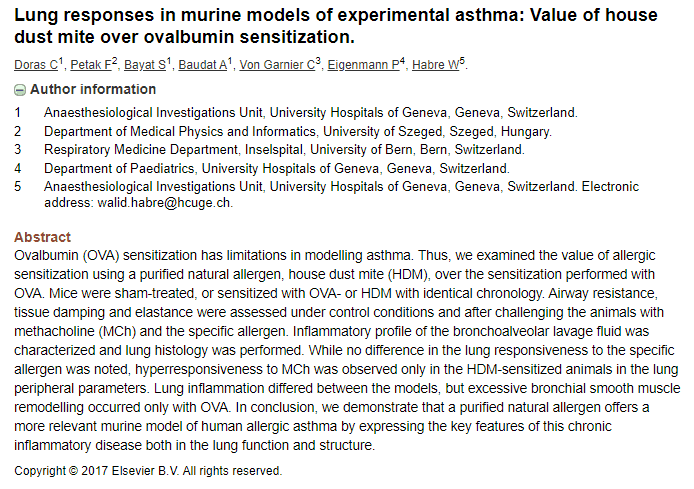 Abstract Ovalbumin (OVA) sensitization has limitations in modelling asthma. Thus, we examined the value of allergic sensitization using a purified natural allergen, house dust mite (HDM), over the sensitization performed with OVA. Mice were sham-treated, or sensitized with OVA- or HDM with identical chronology. Airway resistance, tissue damping and elastance were assessed under control conditions and after challenging the animals with methacholine (MCh) and the specific allergen. Inflammatory profile of the bronchoalveolar lavage fluid was characterized and lung histology was performed. While no difference in the lung responsiveness to the specific allergen was noted, hyperresponsiveness to MCh was observed only in the HDM-sensitized animals in the lung peripheral parameters. Lung inflammation differed between the models, but excessive bronchial smooth muscle remodelling occurred only with OVA. In conclusion, we demonstrate that a purified natural allergen offers a more relevant murine model of human allergic asthma by expressing the key features of this chronic inflammatory disease both in the lung function and structure.

Background Natural killer T (NKT) cells express a T-cell receptor that recognizes endogenous and environmental glycolipid antigens. Several subsets of NKT cells have been identified, including IFN-γ-producing NKT1 cells, IL-4-producing NKT2 cells, and IL-17-producing NKT17 cells. However, little is known about the factors that regulate their differentiation and respective functions within the immune system.

Objective We sought to determine whether the polycomb repressive complex 2 protein enhancer of zeste homolog 2 (Ezh2) restrains pathogenicity of NKT cells in the context of asthma-like lung disease.

Conclusion Ezh2 is a central regulator of iNKT pathogenicity and suppresses the ability of iNKT cells to induce asthma-like pathology.

Background Allergic asthma is characterized by chronic inflammation and remodelling of the airways, associated with dysregulated type 2 immune responses and allergen-specific IgE. T follicular helper cells (TFH ) are crucial in T-dependent B-cell responses and have been implicated in allergic airway disease (AAD). TFH , unlike other CD4+ T cells, are uniquely reliant on continuous ICOS signalling to maintain their phenotype after T-cell priming; therefore, disrupting this signal can impair TFH responses. However, the contribution of TFH to disease during chronic aero-allergen exposure and the therapeutic potential of targeting these cells have not been evaluated.

ResultsTFH were first observed in the lung-draining lymph nodes and with further exposure were also found locally within the lungs. TFH accumulated with sustained allergen exposure, alongside germinal centre (GC) B cells. Blockade of ICOS signalling after AAD establishment successfully depleted TFH but did not affect the differentiation of other CD4+ T-cell subsets. This reduced GC responses, allergen-specific IgE, inflammation, pulmonary IL-13 and airway hyper-responsiveness.

Conclusions TFH are crucial in the regulation of AAD and the ICOS/ICOS-L pathway could represent a novel therapeutic target in allergic asthma.

Background Glutathione S‐transferases omega class 1 (GSTO1‐1) is a unique member of the GST family regulating cellular redox metabolism and innate immunity through the promotion of LPS/TLR4/NLRP3 signalling in macrophages. House dust mite (HDM) triggers asthma by promoting type 2 responses and allergic inflammation via the TLR4 pathway. Although linked to asthma, the role of GSTO1‐1 in facilitating type 2 responses and/or HDM‐driven allergic inflammation is unknown.

Objective To determine the role of GSTO1‐1 in regulating HDM‐induced allergic inflammation in a preclinical model of asthma.

Results By contrast to HDM‐challenged WT mice, exposed GSTO1‐1‐deficient mice had increased numbers of eosinophils and macrophages and elevated levels of eotaxin‐1 and ‐2 in their lungs. M1 macrophage‐associated factors, such as IL‐1β and IL‐6, were decreased in GSTO1‐1‐deficient mice. Conversely, M2 macrophage factors such as Arg‐1 and Ym1 were up‐regulated. HIF‐1α expression was found to be higher in the absence of GSTO1‐1 and correlated with the up‐regulation of M2 macrophage markers. Furthermore, HIF‐1α was shown to bind and activate the eotaxin‐2 promotor. Hypoxic conditions induced significant increases in the levels of eotaxin‐1 and ‐2 in GSTO1‐deficient BMDMs, providing a potential link between inflammation‐induced hypoxia and the regulation of M2 responses in the lung. Collectively, our results suggest that GSTO1‐1 deficiency promotes M2‐type responses and increased levels of nuclear HIF‐1α, which regulates eotaxin (s)‐induced eosinophilia and increased disease severity.

Conclusion & Clinical Implication We propose that GSTO1‐1 is a novel negative regulator of TLR4‐regulated M2 responses acting as an anti‐inflammatory pathway. The discovery of a novel HIF‐1α‐induced eotaxin pathway identifies an unknown connection between hypoxia and the regulation of the severity of allergic inflammation in asthma.

We want to thank all of the researchers, scientists and companies who have been using our products for their research.