During the EAACI congress next week in Helsinki (Finland) a poster will be presented by L.S. van Rijt (AMC, Amsterdam, the Netherlands) using our HDM products. The subject of this poster is: evaluation of a murine allergic asthma model to study immunotherapy with purified Der p 1 and Der p 2.

Fig. 1 Note: NS1 mice are used as negative control since eosinophil percentage in BALF and absolute cell number of eosinophils are observed, comparable to the percentage and total number normally observed in PBS control mice.

Lung tissue was digested and IL-33 was determined in the supernatant. 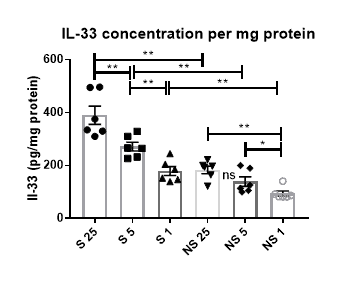 An experimental setup which was outsourced demonstrated a dose dependent increase. This HDM dose dependent increase was detected within IL-33 levels in digested lung tissue in mice. Normally IL-33 is only released by necrotic cells. However IL-33 also seems to play a role in the innate immune response to inhaled HDM allergens. This experiment indicates that IL-33 is increased after HDM allergen exposure. Overall, sensitized mice show a higher level of IL-33 response in comparison with non-sensitized mice. Nevertheless, in both groups 25 µg HDM had an increased IL-33 level compared to 5 µg HDM, and 5µg HDM had an increased IL-33 level compared to 1 µg HDM. The source of IL-33 is thought to exist of recruited cells and increased levels in HDM exposed epithelium cells. Figure 2 shows a clear HDM dose dependent increase in IL-33 levels, indicating that a higher challenge with HDM results in an increased level of IL-33.

The full poster will be published on the EAACI Congress 2017 website, on 17 June 2017. Please contact us if you want to receive more information.