The house dust mite (HDM) Dermatophagoides pteronyssinus is recognized as one of the most common sources of indoor airborne allergens triggering allergic sensitizations in approximately 20% of the population from industrialized countries. Up to now, 18 different D. pteronyssinus allergen groups in addition to Der p 1 and Der p 2 have been referenced and classified as major, intermediate or minor allergens. Der p 1, a cysteine protease, and Der p 2, a LPS-binding protein, are considered as the most potent HDM allergens. Indeed, these two proteins are not only abundant in the bodies and faeces of mites but their IgE reactivity’s can reach up to 80–90% in HDM-allergic patients. Interestingly, a new HDM allergen from faecal pellets, Der p 23 (a peritrophin-like protein), was recently classified as a major allergen.

Der p 23 has high allergenic activity and, therefore, must be considered an important component for HDM-specific immunotherapy. This allergenic protein is present on the surface of mite faecal particles, which is the major airborne form of mite allergens that also carries Der p 1, while Der p 2 is found mainly in the mite bodies. In a European study, 74% of the HDM-allergic patients tested developed Der p 23 sensitization which is close to the frequency of sensitization to that of Der p 1 and Der p 2. Such high IgE-binding frequency was unexpected because natural Der p 23 (nDer p 23) has been shown to be present only in tiny amounts in faecal pellets and in house dust and also poorly extracted under aqueous conditions. Although levels of sIgE to Der p 23 is on average 5 times lower than to Der p 1 and Der p 2 in HDM allergic patients it appears to be ten times more potent than Der p 1 in activating mast cells. Thus, Der p 23 appears both highly allergenic and a frequent sensitizer, i.e. it is a major HDM allergen, which together support/suggest a relevant role of this allergen in the immune response.

The sensitization rate to D. pteronyssinus differs between populations, but on average, more than 10% of HDM allergic adults and children lack sIgE to Der p 1 or Der p 2. Der p 23 can aid in identifying up to 5% more HDM extract sensitized patients than by using only Der p 1 and Der p 2. Furthermore, patients with a considerable or even predominant Der p 23 sensitization can be identified, enabling a better-informed judgement of the potential for successful AIT treatment and/or choice of extract.

A study by Posa et al., also indicates that Der p 23 is important for the developing asthma at a young age. The team examined the data and blood samples over 20 years from German children born in 1990 and monitored since their birth in the framework of the Multicenter Allergy Study (MAS).

The scientists found that IgE-antibodies against three dust mite molecules (Der p 1, Der p 2 and Der p 23) appeared very early in the children’s blood, often before the onset of their disease. Children producing IgE to many molecules (“polymolecular sensitization”) had a higher risk of developing allergic rhinitis and asthma.

Der p 23 is localized in the posterior midgut of D. pteronyssinus HDM

In the figure below a schematic drawing of the digestive tract of the house dust mite D. pteronyssinus. 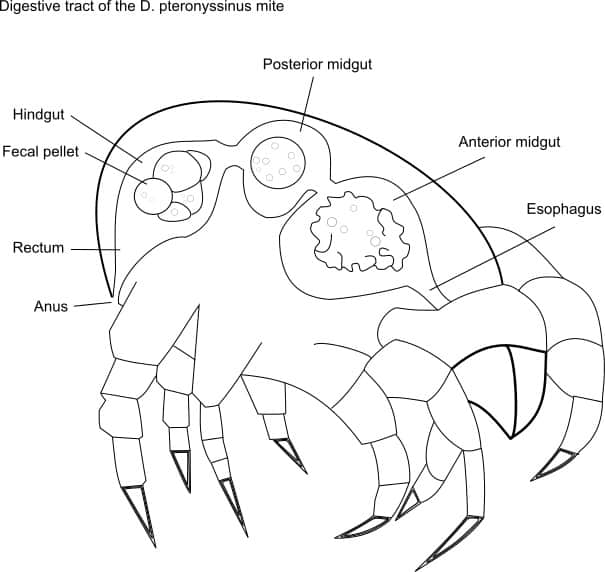 Der p 23 is synthesized in the midgut epithelial cells where the allergen was localized in vesicles. In this part of the midgut the long microvilli of epithelial cells are partially adhering to the forming peritrophic matrix. The digested food stuff is placed loose and more centrally in the stomach. In the hindgut, the food stuff is enveloped by the peritrophic matrix and subsequently packed in the colon to form a faecal pellet. In fact, Der p 23 was found in the peritrophic matrix surrounding the faecal pellet. Lower concentrations of Der p 23 were also detected in the microscopic lighter parts of the digested material of the faecal pellet.

Der p 23 therefore may be considered as an important allergen for the diagnosis and specific immunotherapy of HDM allergy.

Identification of Der p 23, a Peritrophin-like Protein, as a New Major Dermatophagoides pteronyssinus Allergen Associated with the Peritrophic Matrix of Mite Fecal Pellets